Crawford Park has been under ownership of the Town of Rye since 1971.

In May 1904, Everett Lake Crawford of Crawford, Dye andCannon, a banking & financial brokerage, purchased a 30 acre property inRye, known as the Satterlee farm. This parcel was part of 115 acres that the ancestors of Hackallah Brown (later known as Judge Brown) had, in concert with some partners, purchased from Lenape Indians in 1680. Everett Lake Crawford, Princeton class of 1901, and his wife Edna Phelps Gregory built a mansion up on the crest of the property soon thereafter and named it and the property“Shanarock Farm”. From windows on the second floor of the house, there was a view south and east out over the young Village of Port Chester and the LongIsland Sound all the way to the north shore of Long Island.

Mr. Crawford and his wife, Edna lived in Manhattan and, like many wealthy New Yorkers before them, were seeking to establish a summer residence outside of the city.

Everett Crawford was a nephew of Commodore Cornelius Vanderbilt and was thus familiar with the lifestyle of wealthy land-owners. Mr. & Mrs. Crawford owned and bred show horses on the farm and in two other locations on the East Coast (Aiken, SC and Shinto Farm in Millbrook, NY) and were both known in hunting and riding circles in NY, Virginia and South Carolina. In addition to being a founding principal of a stock brokerage in Manhattan, Everett Crawford went on to found and serve as chairman of the Rye Trust Company, later renamed The Rye National Bank. He was instrumental in the establishment of United Hospital and in the "organizing" of Rye Country Day School. The Crawfords liked to throw big parties in the service of their philanthropic efforts.  In 1911, for example, they scheduled and hosted a polo match on Shanarock Farm to raise funds for the expansion of the United Hospital facility.

Mr. Hobart Park was an avid horticulturalist who displayed flowers in competitive agricultural shows. He had constructed a dam which substantially increased the size of the lake on the farm, and he owned hundreds of acres on the other side of Westchester Avenue, now occupied by the Port Chester Middle School, General Food’s so-called “Taj Mahal” building and the Rye Ridge Shopping Center. Polly Park Road, the extension of Bowman Avenue which runs from the Rye Ridge Shopping Center through suburban Rye towards Harrison and North Avenue, is named for Mr. Park’s daughter. He passed away in1905 and Edgar Field Price, an executive and founder of Union Carbide (1), bought the Park Estate with plans to improve it, along with the adjoining Knollwood Farm, including what came to be known as Price Pond.

Edgar Price is credited with the invention and commercialization of acetylene gas which is still used in low torches for welding and cutting metal. As a result, he was a very wealthy man, but in contrast to Everett Crawford breeding and trading of fine horses, Mr. Price collected and bred prize cattle (2). He built a large mansion--outfitted with a full pipe organ in the front room--on the crest of the property, visible across a property line wall from the Crawford’s more modest mansion. He expanded the farm with a large cattle yard on what is now Neuton Avenue, as well a new barn on a rectangular parcel across Westchester Avenue which is now bisected by Maywood Avenue.

Edgar Price passed away in 1935, leaving an estate worth nearly $3 million to his widow, Ida Owen Price, two sons and a daughter. Sometime before 1949, the parcels across Ridge Street were developed into rows of single family homes. When Edgar’s eldest son, Edgar Kenan Price passed away in 1955, his estate, still valued at $3 million, was left to his adopted daughter, Sarah, who was only 14. Knollwood Farm and the Price Mansion were vacated in the early 1960’s. Hilton Hotels acquired what remained of the Price Estate, creating Rye Hills Park on the north edge of the property where the Mansion had stood, and constructing the Rye Hilton (aka Westchester Hilton) using the same winding entrance from Westchester Avenue which previously led visitors to the Price Mansion.

The Westchester Hilton Hotel closed in 2020 due to the travel downturn caused by the COVID-19 pandemic.

Everett and Edna raised three daughters in the Crawfordmansion (Molly, Evna and Frances). Molly and Evna married Bernard Ewing Hopper of Northfield, IL and Jerome Ripley Allen, of Port Chester, respectively, in ceremonies only 30 minutes apart(!) at the Rye Presbyterian church on Nov. 18th, 1933. This unusual and convenient scheduling effectively saved the father of the bride the cost of staging and hosting a second wedding reception (during the depths of the Great Depression) and spared their guests the time and expense of a second trip and visit. The third daughter, Frances, married Howard E. Houston of Meriden, CT on September 9, 1939.

Sisters Molly and Evna were both devoted riders and athletes. They popularized women’s polo, even forming a women’s polo team in Aiken, SC where Mr. Crawford kept some of his prized stock. Evna played tennis semi-professionally as well as squash. The sisters participated in local fox hunts, and Evna bred cocker spaniels and trained them as military companion dogs.  She went on to serve as a judge at American Kennel Club shows.

Everett Crawford died at 80 in May 1960. His will dictated that his wife Edna would continue to occupy the Mansion for the duration of her life, while the rest of the property would be left to the Town of Rye for the purpose of creating a public park, with the exception of one acre of the estate on which sat a large “cottage”, down on the eastern edge at the North Ridge Street entrance. Widow Edna Crawford passed away in 1973, the same year that a fire destroyed one of the barns on the estate, at which point the Town of Rye assumed ownership of the Mansion and full responsibility for the care and maintenance of the Mansion and Park. The middle daughter, Evna Lake Crawford and her husband continued to occupy the cottage down at the North Ridge Street entrance to the park. She and Jerome Allen had only one child, whom they christened Jerome Ripley Allen III. Evna developed Alzheimer’s disease, moved to an assisted living facility in South Carolina and passed away in Aiken, SC  on June 20, 1992, survived by her sister Molly, son Jerome and his two daughters, the result of his marriage to Heidi Voehringer, from Germany, who he met in graduate school. Eventually, Jerome and Heidi moved away, leaving the cottage to one of their daughters, Eva Shamim and her husband, Craig Allen-Bailey who lived alternately in that house and rented space in Manhattan.

On Saturday, September 15, 2001, Shamim and Craig had each gone off in separate directions for the day, but left an unattended candle burning on the sill of a bay window in the dining room. When Mr. Allen-Bailey returned in the late afternoon, the house was fully engulfed in flames and surrounded by fire trucks. When interviewed by the police department later, he reported lighting a “hideous pink candle” in the house earlier, but did not recall extinguishing it. One of Shamim and Craig’s cats, Davey, perished in the fire, but their friskier feline, named Blue, disappeared for a few days before wandering back, covered in soot. The Allen-Baileys believe that Blue probably tipped over the lit candle, although this must remain unverifiable legend, as they were absent at the fire’s onset. The Rye Brook Fire Department deemed the house to be unsafe and uninhabitable as a result of the conflagration.

The Jehovah’s Witnesses had been seeking to build a Kingdom Hall in Rye and so they moved to acquire the ruins of the Cottage and the parcel on which it sat from the Crawford family. The sale closed on April 3, 2003. But the Town of Rye aspired to acquire the Cottage and parcel so as to restore the park to the original dimensions of the estate. Indeed, on April 15, 2003, the Rye Town Board won approval to float a bond of $575,000 to purchase the Cottage and its one acre parcel. On June 17, 2003, the Town Board condemned the Cottage and moved to seize the property through eminent domain. The Jehovah’s Witnesses fought back, suing the Town for the right to take over the parcel and begin construction of the planned Kingdom Hall. But, in July 2003, Judge Harold Baer, Jr. forced the litigants to settle and urged the Town to negotiate a purchase price with the Jehovah’s Witnesses. The parties arrived at a sale price of $750,000 and the deal closed. The property thus reverted to the Town and was added to the tax exempt list of parcels in the Town on December 20, 2004.

The Friends of Crawford Park formed in 1997 to allow residents to participate in park maintenance (and thus to exert some control over the plantings and landscaping). The Friends continue to organize periodic clean-up events devoted to the collection and disposal of litter and fallen branches and the removal of invasive vines. They also host events in the park to raise funds which they have used to install benches, plant gardens and maintain the walkways.

In 2016, the Town of Rye committed to renovating the Crawford Mansion with the intention of creating a more functional Community Center in which a variety of social community gatherings and events could be staged comfortably. Gary Gianfrancesco, a local architect, won the opportunity to lead the redesign and manage the restoration. This effort took over two years, cost approximately $6 million, and included: new windows, doors and an updated HVAC system resulting in vastly improved energy efficiency throughout the building. The original historic assets were preserved, and a spectacular fireplace in a main floor hall was discovered, exposed and restored. Along with the modernization, ADA-compliant features were installed in all bathrooms, rendering the building accessible to the disabled throughout; an elevator was installed outside the Entrance Hall, and the kitchen was overhauled and upgraded to commercial restaurant standards, so that the mansion could be rented out for weddings, formal gatherings, town meetings and corporate events. Very few gatherings took place in 2020, due to the coronavirus pandemic, but bookings have ticked sharply upwards in 2021. 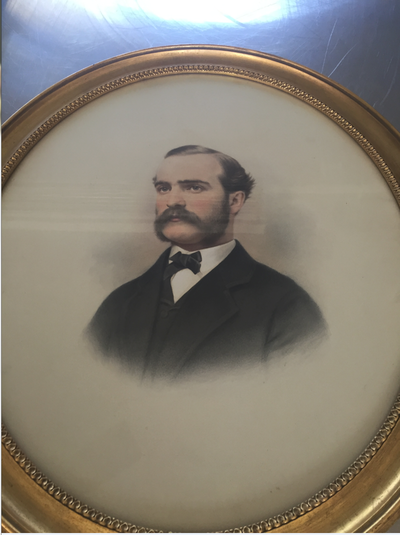 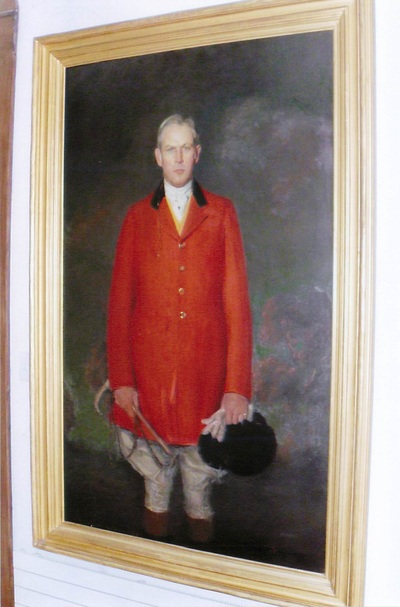 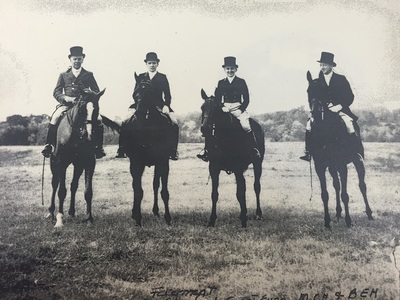 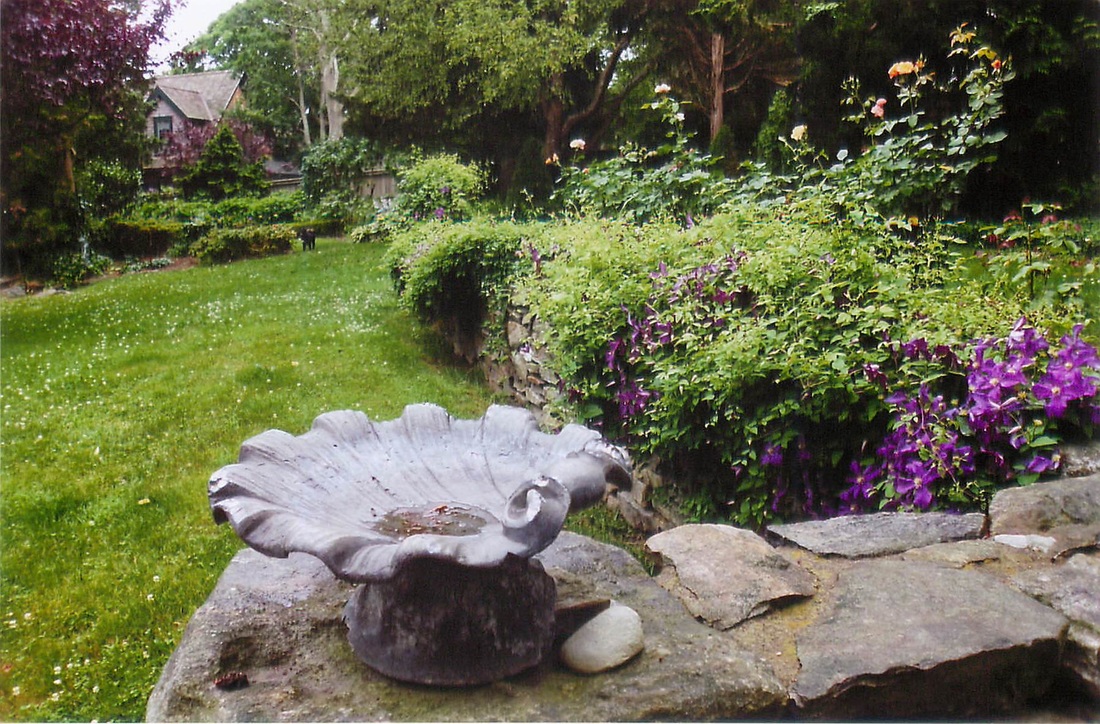 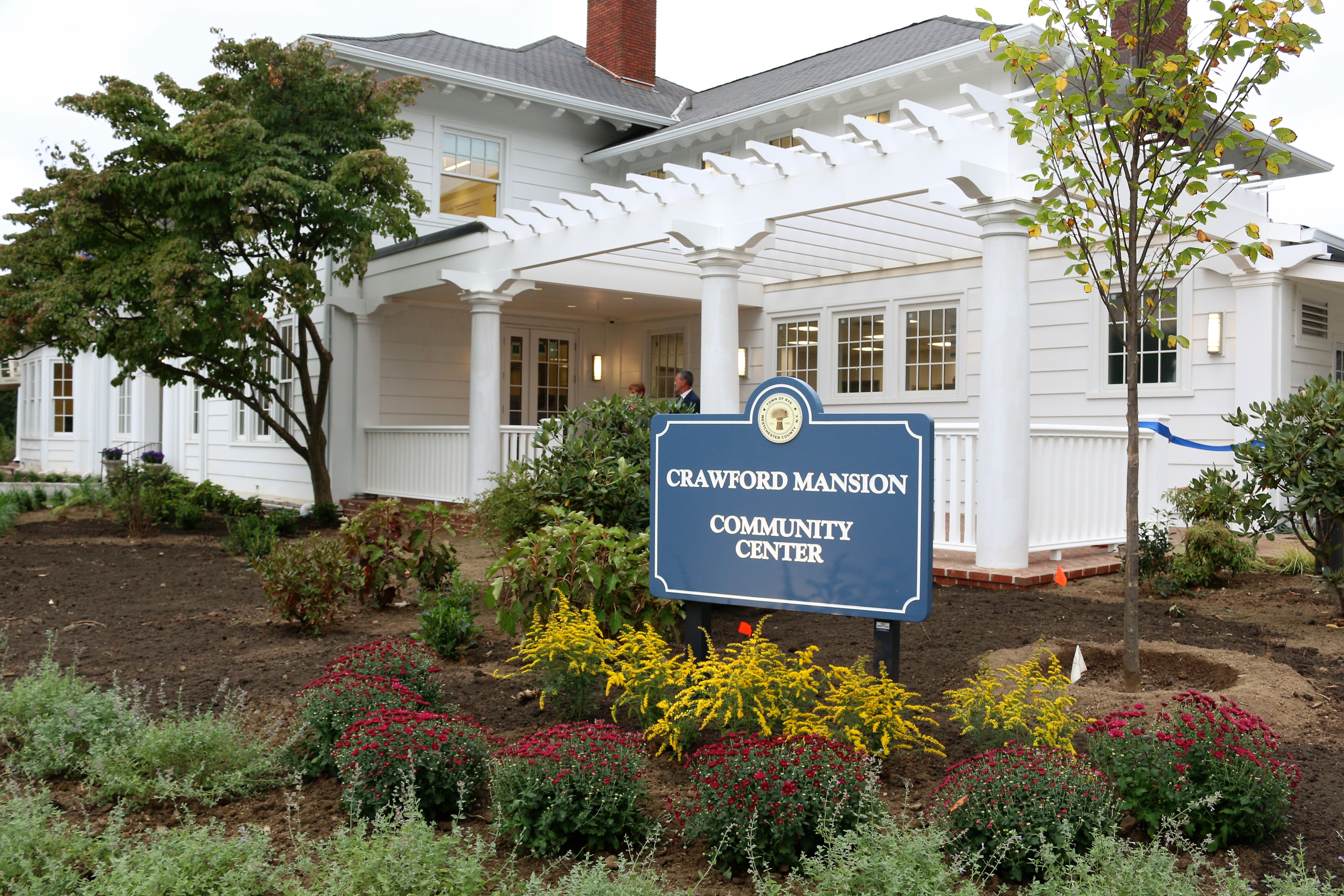 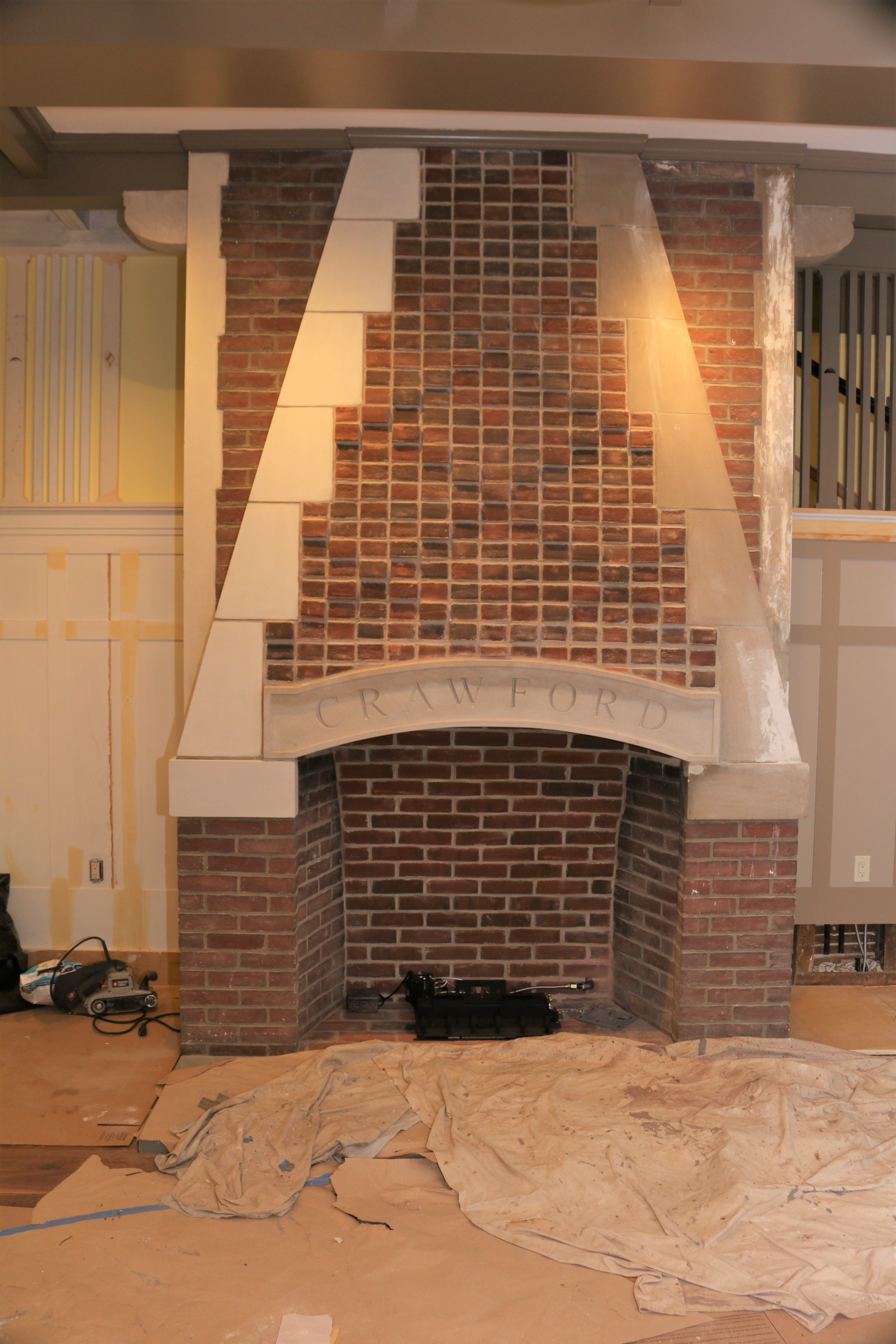